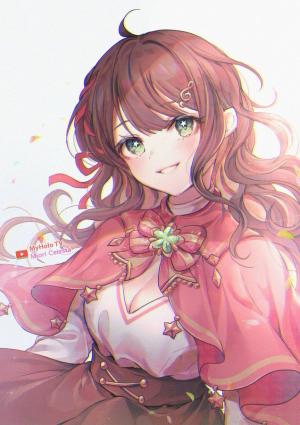 Miori is a female VTuber associated with the first gen of Tsunderia, titled "Tsunquest". She debuted on 20 December, 2020 as part of MyHolo TV's second gen, and later graduated from the agency on 21 March, 2021. Unlike her genmates, she decided to continue her VTuber activities and become an independent VTuber. She bought the rights to her channel, image, videos, Twitter, and her avatar assets upon leaving. On 3 May, 2021, she announced that she'd joined Tsunderia as part of its first gen. Her nickname is Mio, her age is 17, her birthday is 4 March and her height is 160 cm (5'3"). She is an isekai adventurer and guildmaster who enjoys drinking, even being called Beermaster by her fans, and is skilled at singing, composing and mixing. She is fluent in English and Korean, and is currently studying Japanese. Her streams are in EST or KST. Her fanbase is officially called Guildmates. Her mama is @ozzingo and her papa is @VeinyST. Mio's hashtags are as follows: #mionobouken - live/general; #miorillust - fan art; #miolust - NSFW fan art; #konoMioda - Memes; #guildmates - Fandom; and #celestunes - Music.

A newbie quest-loving explorer from an isekai universe, Miori Celesta was a guild receptionist at her family’s inn. Tired of her work, she decides to set out and become an adventurer on her own. After a mysterious magical force whisks her away into the human world, Miori becomes determined to explore all the unfamiliar adventures hidden in every corner of the world. In hopes of growing a guild and affording better gear, she decides to become a VTuber as she goes on adventures while occupying herself with music and a cold glass of beer when she’s not completing quests.