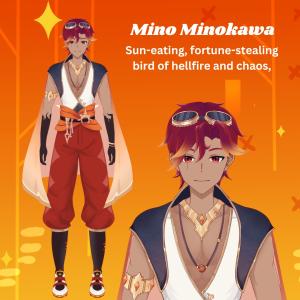 A thief (treasure hunter?) possessed by the sun-eating bird of the eclipse, Mino Minokawa is a man of many faces. Sometimes his streams are chaotic, as he shoots zombies that are modded to look like childhood cartoon characters, and spews language reminiscent of kanto netshops after four p.m. Sometimes his streams are him drawing while listening to chill beats, barely saying a word. Don’t question why he uses a hotdog to draw, you might not like the answer. He likes multiplayer games, sub sandwiches, and hip-hop.

Mino Minokawa, the sun-eating, fortune-stealing bird of hellfire and chaos