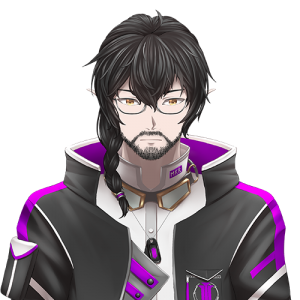 Mikoru is a male streamer with a heavy focus on first person shooters and sandbox games. Has been known to play third person shooters, rts's and on occasion some virtual reality games. His streams tend to err on the more mature side with profanity and darker humor. He has also been know to do covers of metal songs.

A half elf who sought to make more of himself than the people around him thought he'd be capable of. He grew up with his human mother in the human lands and was a quiet, but thoughtful soul. He'd always make an attempt to help those around him and would consistently lift others regardless of who they were. His mother soon passed from old age, despite him still being a rather young half elf, as is what happens. After schooling, he joined an adventurers group to explore the world, and commonly fell into the human majority groups due to where he was raised.

Because of this he consistently outlived them, and would see his closest allies die, whether from old age or simply from the type of work he engaged in. He eventually signed up for the military once the elven lands started becoming hostile, and fought in what would simply become the great war. After the war, he gave up traveling, and chose to settle down, taking steady work and filling his free time with games and art.