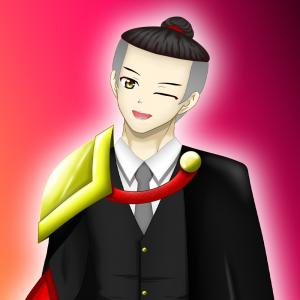 Megura Maki is a Filipino Male Virtual Content Creator who makes English and Filipino content. He created his own Live2D model, both illustration and rigging. He streams gameplay, art and rigging, karaoke and reaction videos. He's always lurking around other VTuber/VStreamer to support them.

Summoned to another world along with half of his class. They had the goal to stop the Demon Kingdom in the Demon Lands that kept expanding its territory.

Due to 'Starter' unique skill, he was neglected as a Hero party member, as it makes improving skills, magic and abilities at the start very fast and easier to acquire but slow down as it further advances.

He became important again after 'Enchanting' unique skill evolved into 'Bestowing' (Can bestow anything and anyone with owned skill, magic and abilities).

Got supported by the Intelligent Races Alliance (Human, Elf, Dwarves, etc..) and was able to become strong enough to create a great army due to his 'Bestowing' unique skill.

But still having his 'Starter' unique skill in its full effect due to his growth boost, he was no longer needed by the Intelligent Races Alliance and Hero's party as they already got the Great Army they needed.

They were threatened by his abilities, and being fully aware how they neglected him in the early times, they saw the possibility of him creating his own great army and rebelling to them. With the Intelligent Races Alliance and some of the Hero party's support, he was betrayed and killed.

Realizing what happened, his 'Starter' unique skill finally evolved into 'Regressor' and he was back at the very moment of their summoning. It took a while for everything to sink in, but it was this time that he decided to do what he wanted instead.

He made the Intelligent Races Alliance think that he was not useful in the Hero's party and left with minimum support to live. Taking advantage of knowing what will happen in the future, he became a Mercenary/Adventurer to train.

Having the 'Regressor' unique skill made it impossible for him to die. This skill allows him to regress back to any point he wanted any time he died. The growth correction was not only removed, it was improved instead letting him have all the skills, magic and abilities even after dying and regressing back at the appointed time. (This is the reason why age is 1000+ years old as this includes all the time regressing back again and again.)

He became a S-Ranked Mercenary/Adventurer, created his own party that he fully trusted and trained with his other evolved unique skill 'Bestowing' after travelling around the continent.

This journey led him to discover the reality of their summoning. The Demon Kingdom was not looking to expand its territory at all. It was the exact opposite, that the Intelligent Races Alliance was starting the War to conquer the resource-rich Demon Lands having high concentration of all high quality metals, minerals and jewels, as well as high density of mana needed to improve mages and untouched lands.

This made him decide to end the pointless and unreasonable war. Another reason is that three of his party members are Demon-kin. He finally travelled to the Demon Lands and entered the Demon Kingdom.

This was the turning point where he really became unbeatable as he gained the 'Demon Eye of Depravity' after becoming a half-demon. This allows him to deprive any Skills, Magic and Abilities the opponent have. Matching with his 'Regressor' it made him able to deprive any skill so many times and with 'Bestowing' allowing him to grow his Army and Party members endlessly.

With him in the Demon Kingdom, any attempts of the Intelligent Races Alliances for war was for naught. Him being a half-demon too, he gained 'Eternal Youth' trait, so no dying of old age.

Long time passed and losing his hatred with the Alliance (a.k.a. Intelligent Races Alliance) after they stopped all their war attempts, he focused on isolating the whole Demon Lands and improving their lives and livelihood, as well as that of all his former classmates, the Hero's party who might have all died due to old age. Becoming close to the female Demon King, creating a modern style everyday life and creating so many descendants with his female party members, he had the most fulfilling life going forward.

The long peace stopped all conflict from happening again and the Demon's society become very advance and stable. This made him want to finally come back to Earth to try and get back to his normal, average life.

After reaching the pinnacle of so many legendary skills, magic and abilities such as Space-Time Magic, Void Magic, Soul Magic, Spirit Magic, Mana Embodiment, Divinity, Inhumanity, etc... He finally found the most safe, specific and sure way of coming back to Earth.

With all his sentiment, emotion and mindset stable after a sad goodbye, he died artificially, but still considered non-artificial for all my anti-death skills, magic and abilities not to trigger. This is to only have his soul stay alive and do the travel to Earth, while his physical body is dead.

He was finally back on Earth. Reincarnated in a body of an orphaned child whose parents died as hunters in Monster Stampede that overflowed from a Labyrinth that was not managed properly by the supervising Guild. Yes, only 100+ years passed on Earth from the time he was summoned but it changed so much.

Earth's no longer safe and everyone thought it's the end because Labyrinths appeared and monsters spawned non-stop. But super humans also appeared having the ability to retaliate back again, becoming known as Hunters and Guild becoming the protectors of Earth where society, economy and technology was destroyed.

Realizing that the Earth is in danger, even only being able to take back the three most important things: 'Bestowing', 'Regressor' and 'Demon Eye of Depravity', he decided to become strong again and build a Guild that will protect and raise the Earth back to where it once was.

This is the whole story of how Megura Maki became the number 1 S-Rank Hunter and MaKins Guild Master.

And since everything is getting back to its peaceful period, he decided that he would do what he's always loved. To become a VTuber/VStreamer and entertain everyone and help them forget all the painful experiences they had even for a small little while.

(Was in a 2 months hiatus) I was then needed to do a very hard dungeon quest and it made me absent for 1-2 months. I was able to overcome this though and came back as a Hunter of EX-Rank! The highest hunter rank currently possible on Earth. It was a reward after successfully subjugating an EX-Rank Crimson Demon Dragon.