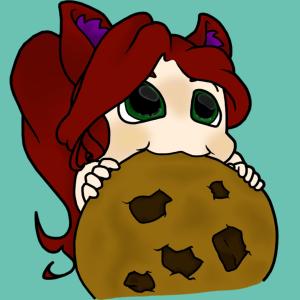 MallowCat is a female catgirl Vtuber who makes content in English and lives in a MultiDimensional Space Station between universes. Though many of her streams feature gaming content, this is not the main focus of her channel, but rather MallowCat prefers to focus mostly of interacting with her chat and discussing topics of all sorts. While the channel is a light-spirited and fun-filled place, MallowCat has been known to address topics including mental health, disability advocacy, public education, current events, and more.

~Her species branched from the Cheshire Cat line about 1000 generations ago, give or take. Some of that history is lost, so best estimates have to do for now.

~As far as we know, her precise species line is extinct apart from herself.

~Analysis of MallowCat’s molecular structure reveals that she is made of a substance resembling strawberry flavoured marshmallow creme (most of the time) but she also has some ability to change her body to suit the environment she finds herself in. It is currently unknown how much control she has over this capability.

~Mallowcat’s favourite food is chocolate covered berries, and her favourite drink is sweet iced tea. She does not consume alcohol, but she does use ”catnip” to help with sleep and chronic health problems.

~Her favourite colours are purple, cyan, and mint green.

~Her hobbies include designing outfits for herself and her family/friends and interior design.

~MallowCat built ”The Space Station” – which is actually a research station between universes – based on notes and documents uncovered from various sources after a series of ”natural” disasters devastated her home world. Because these documents were all damaged to varying degrees, the Space Station regularly experiences minor technical issues – none life threatening, but all annoying.

~MallowCat and OverlappingMagisteria met when MallowCat was on a special assignment in Magisteria’s home world. MallowCat had been caught by local authorities, and Magisteria helped her escape and complete her mission.

~When MallowCat had to leave Magisteria’s home world, she invited him along. ”You have a lot to learn, and you can’t do it here. There’s a whole multiverse out there, if you’re willing and able to be the best student you can be.”

~Magisteria and MallowCat married in a short but beautiful ceremony on the garden deck of the space station. Headset was Maid of Honour. Smiley from Catricorn Cafe was there but was not part of the wedding party.