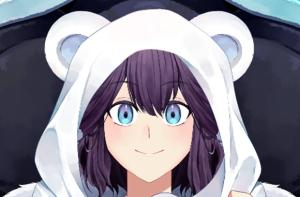 Chibifayth and her teddy polar bear Denzy take on the world of gaming together. They play ssbu, mario party and many other titles!

A group of young boys run away laughing as an elder woman walks toward them. As the boys run, a girl is revealed having been pushed down into the muddy ground. Little Fayth sniffles as she stares at her favorite purple dress that is covered in mud.

I hate it here.

Her grandmother leans to encourage her to stand. Fayth angrily wipes away her tears after getting up from the muddy ground. She tries to make friends but only talks about her video games and they think she is odd. They bully her relentlessly for not being into things they were. “I'm going home to play video games, they treat me better than people do.” As Fayth begins to walk away, her grandmother calls out, stopping her. “Here,” she hands her a simple stone carving of a bear, “Make a wish when you're in your greatest time of need.”Fayth is puzzled, but she thanks her for it.

The night is windy as Fayth drives home. Snowflakes on her windshield cause her to smile. Her eyes dart to the stone bear hanging from her rearview mirror that she received as a child. "I miss her. She would have loved this winter." Her reminiscing is cut short by her car skidding. Fayth's heartbeat is rapid as she tries to balance the vehicle. She screams as it veers off the road and heads straight for a large tree. Fayth covers her face too late, and she hits her head hard. Her mind wonders about the warm flowing sensation on her body. The fact that her clothes are covered in blood escapes her. Fayth's vision is blurry, but she makes out the vague figure of the stone bear. Her hands barely touch the bear before she passes out. A sudden sense of calm washes over Fayth. “What is your wish?” A dark, soothing voice asks. Fayth's life is replayed in her mind – her rough childhood, how awkward it was growing up, and the time when she gave up on finding love. Her heart clenches in pain.

“Not to be alone anymore,” she smiles and nods.

As her eyes open up, she is met with a view of a rough purple landscape. As her eyes regain focus, she can tell she's lying on the floor of a large room of what seems to be crystal. She lifts her head up and examines the massive room of amethyst, clusters of crystals towering over her. Confused, she peers over and meets gaze with the large black eyes of a giant and surprisingly nicely dressed bear, sitting upon a huge throne. He flashes his large teeth in a smile, but she sits back in fear wondering where she is.“What is this place?” She calls out. The bear rises to his feet, Fayth gasps in awe at his stature as he looms over her. He looks down at her and laughs a little, “Finally! It’s about time you came back. I’ve been waiting a long time, I’ll have you know." “Come back?” Fayth asks, confused even more. The bear looks at her with a raised eyebrow.“You don't remember? After all we've been through.” The bear says, looking down and shaking his head. “What about me?” he asks“What about you? You’re big and scary?” Fayth replies.“No!” The bear lets out a sigh. “You don’t remember me either huh?” Fayth could see the bear’s face looked frustrated, but saddened “We’ve been through a lot and I had to just sit there watching. The teasing, the torment, the mistreatment…”The bear shakes his head as the frustration overwhelms him “I couldn't even do a thing!” The bear yells out and begins to snarl, Fayth gets a little nervous from his loud yell. “What are you talking about?” She asks. “All the verbal abuse from those around you, all I wanted was to be there for you, all you had to do was make the wish!” he yells, his voice echoes off the crystal walls. Fayth cowers back in fear of his thundering voice. Silence lingers in the air for a few moments.“Then you’d never have to be alone.” He says calmly and begins walking back to his throne. Fayth looks around the castle of Amethyst and an image of the crystal carving that appeared after she made her wish pops into her head. There's only one thing that's always been with her, even when she felt completely alone. She looks at the large polar bear walking towards the throne and his words echo in her mind. “All you had to do was make the wish!” As she stares at the bear, all of her memories come flooding back. Feelings of pure joy and love rush into her heart as she realizes who the bear really is. She climbs to her feet and starts running to the giant bear, she wraps her arms around him as tight as she can.“I remember you,” She says with tears streaming down her face. The bear looks down and smiles, “Now you will never be alone again.” He says, as he does, a magical haze begins to cover his body. His large figure begins to slowly shrink down and morph, Fayth gasps in confusion as the bear transforms down into a teddy bear. She continues to hug the bear as tight as she can, knowing her best friend is here with her forever