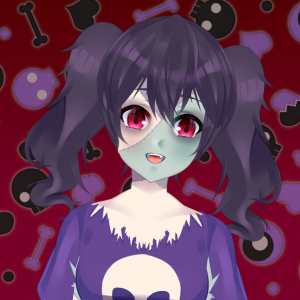 Lilith Thelema is a zombie Vtuber from Australia. She specializes in fantasy RPGs and boomer shooters. She streams a variety of games, but her most notable ongoing playthroughs are of The Elder Scrolls III: Morrowind and the Quake series. She is part of the group Eto Ano as one of their Graces.

Lilith Thelema comes from a long line of magickians who eventually saw themselves fit to change their name to that of a recent system of magick in order to promote it. Lilith always had a keen interest in magick but never actually practiced it that much. One day, when she was trying to raise a dead body as a zombie, the spell backfired and killed her. Thankfully, Lilian Goetia, a scarecrow Lilith had brought to life with a demonic spirit, was nearby and successfully cast the spell on Lilith. Now Lilith Thelema is the very zombie she tried to create.