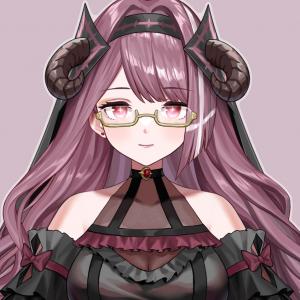 Kuromiya is a female VTuber creating a variety of content related to gaming, tarot reading, ASMR, and music. She often plays games in collaboration with other creators, most notably "Among Us" and "Phasmophobia". As a book shop owner and avid reader, she often gives book recommendations to viewers and offers free tarot readings to her followers.

Kuromiya Lucien, also known as Lulu or Kuro is a demon from the lower circles of hell, who came to earth to open a book shop called "Black Sheep". After being cast out by her family in hell, and pushed onto the lower circles for reasons yet to be concluded, she waited for a human to find her sigil in a book and offer a body to possess. By the laws of the occult, she was made mortal in return and had to adjust to the experience of pain and hunger. Her eyesight is impaired and she wears a veil to protect herself from other entities possessing her body. Occasionally she takes requests to reveal her true demon voice. Her followers are called "Black Rams" and she survives on the human souls offered to her.

Lulu revealed a preview of her demon form before losing memories of a glitch occurring during her stream. Later she announced having collected enough souls to commence a ritual to return to her demon form. She has confirmed this change to be final and announced a provisional re-debut date for 666 (06/12/21).

During the lore drawing stream, Lulu revealed she traded the souls she collected to return the body she had possessed to her owner and erase her memories of being a demon vessel. The ritual to return to her demon form took 33 days on the surface world and 33 years in the in-between, a place far off of heaven and hell, where souls go to pay the price for carrying a physical form into the mortal plane. Lulu stated she didn’t want to discuss the details about the in-between, but made clear that it’s a world demote of any light and sound, where beings are stripped of their powers and pinned to fight against each other.

She was offered a contract by a being in the in-between at the end of her sentence, giving her the option to return to hell and possess another human body or taking her demon form to earth in exchange for keeping the peace between occult forces. After offering her a glimpse into the future of the earth, where she would deny the offer and return to hell, she agreed and was granted a thorny halo to show her newly attained status as well as a book to serve as a guide. Lulu returned to earth and began to dust her book shop, happy the black rams waited for her and having a home to return to.

During her Subathon on 08/08/21 Lulu revealed a short lore teaser that implies her recent research is leading her to return to the in-between, unsure if she had fully left. She ended her stream with the urge to "make a choice" before the date 08/29/2021 briefly flickered across the end screen.

The following lore stream revealed Lucien preparing for a mission she might not return from, as she enters the in-between. The stream revealed her past relationship with her mother and showed a glimpse into her work as Keeper of Peace between the Occult Forces.

She left the library on 08/29/2021 on a journey to the in-between, though it was later revealed that Lulu's prior version had never really left the other dimension.