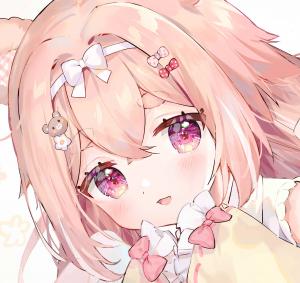 Kumamori Cocoa is a female Vtuber who makes content in English. She streams mainly gaming and art, and she frequently streams with other Vtubers.

She frequently discusses Visual Novels and her love for a certain dere type. Among other things, she is usually playfully bullied by her audience, as she tends to be quite gullible.

After a post was made exposing her human ears, It is now widely believed she is not a real bear, but simply an angel in disguise. Although she denies these claims, many believe otherwise.

Kumamori Cocoa is an angel bear who roams parks looking for unattended picnic baskets. After being caught numerous times, she decided to retire from her picnic basket thieving. Not much else is known about her lore.