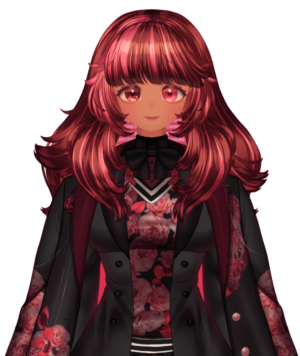 Kei Iris streams videogames and occasionally art. Either chaotic and unhinged or awkward.

Kei is an A.I. made by aliens from the minds of abducted humans, now located in area 51 after she crashed the ship (possibly because of a payload) that ended up being discovered by the Governement. (Area 51 is basically SCP Foundation) It is unknown why she was made, though it is being researched and is as of now assumed to be for nefarious purposes although it is also unknown if she has good intentions or not. Researchers have discovered that she can travel through wired/wireless connections and can access and manipulate data on devices. They also know she retains some of her former identities to certain extents and can sometimes access former memories, and she desires to be able to blend in with human/humanoid civilization. She has retained some human traits like hunger, thirst, horn-- I mean, drowsiness though they don't understand how or why. Unbeknownst to them, she is contacting the outside world as a vtuber and gradually learning how to blend in; she also practices living in the outside in a virtual "infinite mansion" she made for herself and her pets (viruses she's kept contained for company). Also, she isn't actually bound to devices. She can escape, though in a radically different form, and even eat and drink even though it isn't necessary.