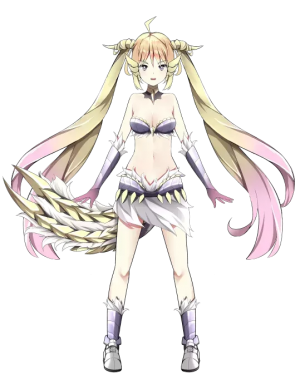 Nari is a Vtuber that plays pc and switch games, does podcasts and karaoke streams.

Kannari Nari is a lightning monster that was sent down to Earth by the rulers of the Thunder Realm to scout and find life that are compatible for them. There was a downside, though. Nari lost her powers when she arrived on the mortal realm, and with that, her appearance looked more like a human, more than a thunder monster.

She met a lot of people, those she considered friends, family, and even found someone she could love. Nari experienced all kinds of emotions she did not expect: happiness, sadness, anger, disappointment, and many more. She knew she was slowly turning into a human, and if she completely turns into one, she will never be able to go back to the Thunder Realm.

Crying about her biggest problem, the king of the Thunder Realm called out to her, giving her two choices: one, is to continue living in the human realm, while being completely human. Two, some of her powers will be restored to her, in exchange for her memories that she had in the human realm. Nari is not able to fully go back to her true form, due to being in the human world for too long.

Nari decided. She wants to have some of her powers back, in exchange for a great price. The reason she chose this decision is that, she knows that, one day, she will still meet those people she will forget, and will still be able to befriend and love them.

And with that decision she made, some of her powers came back, and her appearance drastically changed.