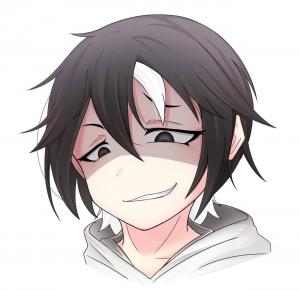 KamiyaJuu is a Vtuber from the Philippines who is "aiming for the top".

KamiyaJuu made his debut on YouTube in August 2020, declaring to become "the best VTuber there is". Along with his scripted Vtuber vlogs, Kamiya uploads a variety of videos such as funny shorts, gaming, singing, memes, fanart, voice dubs and impressions, and visual novel presentations.

KamiyaJuu is best known for his voice and voice acting, which resembles Hiroshi Kamiya's performance as Levi Ackerman in Attack on Titan. He is also known for using a mix of Japanese, Filipino, and English (or JA_PH_EN_ese) in his speech. Kamiya actually does not speak Japanese very well and uses random translations of his lines, along with speaking Filipino (and sometimes English) in a Japanese accent, to make him sound like a Vtuber (however, he is willing to learn more Japanese). He can speak clearly in English and Filipino separately.

KamiyaJuu's first Vtuber model is 3D and it's basically "HairSample_Male" from VRoid Studio but with modifications to the face and hair (adding some white strands under the black hair).

On June 2021, KamiyaJuu made his official Live2D debut. The art and Live2D rig for his model were done by Aster (@_4st3r) and Zakku (@datenshi_zakku), respectively from Twitter. His Live2D design is similar to his first 3D model, except his white hoodie is now a hooded jacket and he wears a black turtleneck shirt underneath.

Since KamiyaJuu's Live2D debut, the amount of subscribers on his YouTube channel escalated within a couple of months and becomes one of the fastest growing VTubers on YouTube in 2021.

On August 2021, KamiyaJuu revealed his second Live2D outfit, along with new lore, in a 2-part visual novel presentation. His "Isekai Arc" outfit contains longer hair, white dress shirt, black chest harness, black choker, as well as a jacket cape, an over-the-ear microphone, and a red earring on one of his ears.

KamiyaJuu's live debut is on his 1 year anniversary.

Kamiya's Story: From rock bottom, a homeless man begins his journey to become a VTuber. As he gained more subscribers, he went from a dungeon, to a forest, to an alleyway, to a jail cell in Vtuber prison, to (finally) a house (a trashy house, but a house nonetheless), where he slowly starts adding furniture (using imaginary money earned from gaining subscribers). With the help of his assistant Alexa and other supporting characters, he hopes to gain enough subscribers to build his empire in a mansion for his community.

Isekai Arc: One day, just when he was about to move out of his old, trashy house from his massive success in his re-debut as an Ikemen Vtuber, he gets raided by the FBI and was put in jail (again). When he escaped from jail from the help of Yagoo (a picture of Yagoo's head with tiny arms and legs that was on the wall from his old house), he gets hit by a truck and was taken to another world (isekai'd), where he wakes up in a comfy bedroom in a new (still Ikemen) body and meets his isekai counterpart of Alexa, Siri. He accepts his new life in a new world as he begins to explore his new home.