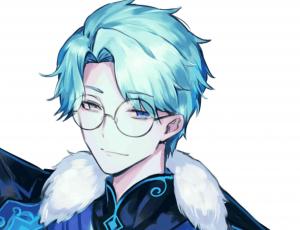 Kei is a Korean/Chinese ENVtuber who malds on Twitch. He is a variety streamer that mostly plays popular FPS games such as Apex Legends, Valorant. On certain occasions, he will serenade you with his singing regardless and possibly show his soft and delicate side.

A Volleyball player, known as an all-time rookie and star of the show, helped his team dominate his competition. Unfortunately, he was unable to be satisfied with his position replacements and kept losing more and more. His engagements may seem soft and likable, but on the inside, he wants to see the world end; he is unable to understand what is right or wrong, he is always in despair.

Now coaching for Morning Star Academy, he sometimes feels left out, removed from all course of action, only to train alone.

In his free time, he tends to stream and play games alone or with others only to find a reason to live in this world.