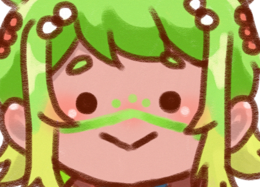 JojOnny (aka JJ) is a Frog Ventriloquist VStreamer/Tuber from Brazil! He's never alone because JJ always brings his ever faithful Puppet and also Fred his childhood frog Friend! Streams everyday at 8pm BRT! He streams in PTBR but he also speaks English Fluently~

JJ doesn't have a clue of what happened, he used to be a regular tree frog like his buddy Fred and apparently both were cursed by Auri the Mushroom Witch from the Enchanted Forest where he lives. He's doesn't recall being an actual frog if it wasn't for Fred helping him remember

JJ became a human with a childish body and a mind of a frog, as for Fred, he still kept his Froggy form, but got the hability to speak, stand and walk on 2 legs.

One day JJ learned that Auri's cursed Funghi had the power to resurrect the dead by putting their souls in a Hollow body, but he also figured out that the Funghi were also toxic.. So he started using it on whoever crossed the Enchanted Forest, putting people's souls inside toys he carved and stitched himself.

Since that day he became obsessed with toys, so he started making more and more.. For years no one dared to venture inside the Enchanted Forest, but then, yet another victim, unknown, trespassed the boundaries of the Forest in search of the missing people, and got turned into a little puppet doll..

JJ wasn't able to separate the man's soul from his body, but.. it slowly started to transform, and in 3 days, which was unusual, the man became a little Pupeet doll.. Who wasn't able to move, speak, or feel And that's how it all started..