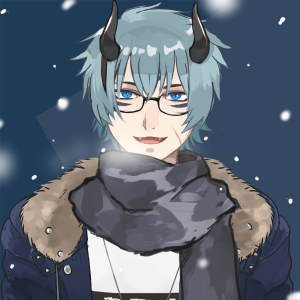 A Fair Oni that has been raised by his human guardians after his parents have been killed when he was born, but as the human guardians were scared why the spirits were attracted by this child they gave him a amulet that would protect him from them but in doing so it suppressed his Fair Oni side and later on a mission in the Sacred realm and using too much of his magic John goes berserk and ends up shattering the amulet without knowing and his hair starts changing tone and horns start to grow out as he is attacking his enemies. Later he meats a familiar presence from a spirit that he later befriends that he doesn't know till in the near future is the combined spirits of both his parents.