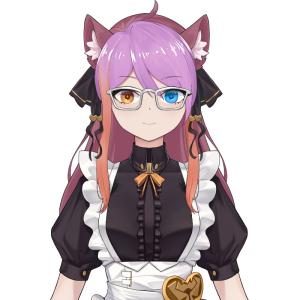 A neko maid vtuber running a cafe called 'Waffy's Cafe' loves to make funny humor, meet new friends, tell stories about her life, talks with her fanbase a lot and loves to play games! She makes videos for other vtubers as well!

Waffy isn't the best at understanding people. Tasks she is given are hard for her to follow sometimes. When she was young, she had neighborhood kids she would always play with! But they only wanted to play with her because of her stuff. Basketball, baseball, biking, so on and so on. She brought it outside to show her friends the technology and such. She didn't know her friends were being mean and treating her badly because of her disability and how well she understood things. Her stuff gets stolen, hidden, taken, and said to be her stuff. She just wanted to see her friends and others happy! Until one day, she realized they were not treating her right. He then stayed inside her room for awhile, watching TV shows, playing games, and not playing with people outside. She began to get anxiety and stress when playing or talking with people outside of her home. Problems talking and such with other people were a big thing for her. Her parents and relatives didn't know what was wrong with her. She was diagnosed with autism. Waffy's mother didn't know how to deal with someone with autism. Waffy was diagnosed when autism was still being studied and understood by the public. Waffy's mom had never heard of this before. She didn't know how to handle a neko child with some special needs. Her mother tried to help in many ways, but Waffy got violent kicking, hitting, banging her head and verbal abuse with swears. She got into fights, throwing things at people, biting teachers. So much! But nothing was said by Waffy to express why she was doing this. Waffy was scared and confused. Until one day, Waffy was in a corner sobbing and realized something was out of nowhere. "Why am I doing this?" Waffy understood stuff and found new ways to make herself known and feel happy! She discovered how to make people laugh and enjoy her comedy, stories, and so much more! She had to make it known to others and see others to make them happy. So she made her own cafe! Why a cafe? She thinks sitting with the person and talking with them will make them feel better! Understand them, laugh with them, make jokes and play games! At Waffy's Cafe! She calls it after herself so other people will know about her. A magic cafe! It only appears if you are feeling down and depressed on that particular day. The door will show! Come inside to Waffy's Cafe! The cute pink-haired neko maid will greet you and make your day feel better! All the sorrow, sadness, and depressed memories will go away after you spend a day at Waffy's Cafe!