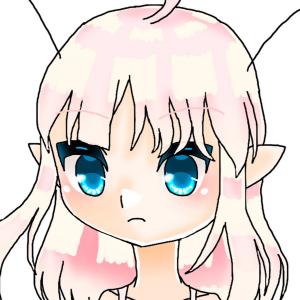 Yunoki Itosugi is an butterfly from the Republic of Arcadia/Old Arcadia who transformed into an human, with the purpose of communicating with humans from Earth. Yunoki was originally a Bitstrips character created in 2015 until 3 years after its shutdown that her name and appearance was changed to an animesque artstyle. Moreover, she mainly streams in different genres.

Yunoki was born in the Republic of Arcadia, commonly referred to as Old Arcadia, to an unnamed male butterfly and Kohana. When she was an caterpillar, she ate an milkweed that contained an parasite which infected her. However, due to her species' live expectancy, she wasn't able to live longer like humans so she decided to go to the human world where she was first examined by human scientists who failed due to the parasite managing to escape from its host and decided to infect another butterfly.

At the end of March, Yunoki granted an human form and began to communicate with other butterflies until the plague involving butterflies happened in late July when most of the butterflies except for Yunoki (who fled from her birthplace to the human world) in Old Arcadia began to mutate into a human. While in the human world, Yunoki decides to go find a place somewhere else so she decided to settle in an village known for its hatred of butterflies that she immediately fled to Sakurahama Island where she was offered an part-time job at an convenience store, but was fired after only 4 months.

While wandering in Sakurahama Island, Yunoki saw the Kawasaki Sisters and their older brother Naoyuki Kawasaki, and wishes to become them so her wish was granted.