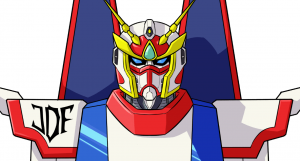 Hyper Robo Tenguris is a streamer that streams a mixture of classic retro games and modern day future classics, be it good or bad.

Hyper Robo Tenguris is a member of the Justanian Defense Force, and originally resided in his homeworld of Kierke, located in the Justanian Star System. However, he is one of the final remaining members of the JDF due to the machinations of a former member gone rogue named Hades Jaeger, who was responsible for annihilating about 75% of the JDF, which included Tenguris' "soulmate", Apollyon Artemis.

Ever since then, Tenguris has had a burning hatred towards Jaeger for what he did, and has followed him from the Justanian Star System into the Solar System, namely the planet Earth. Now, along with his two medical drones Raan and Ruzzel, Tenguris does his best to safeguard the Earth from not only Hades Jaeger, but also from other dangers.

When not protecting the world, Tenguris streams video games and relaxes during his spare time, and is always looking to meet new friends, be it humans or Vtubers.