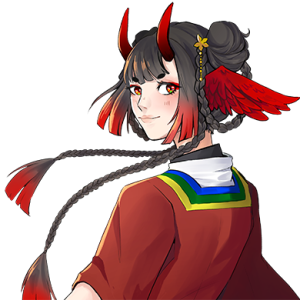 Hanchu is a femme vtuber/vstreamer who primarily streams variety including single player campaign action/adventure games, shooters, JRPGs, and the MMORPG Final Fantasy XIV on Twitch and creates highlight videos for YouTube. They co-run a raid group for FFXIV.

The Vermilion Star Bird is a ethereal creature that has roamed the skies since the dawn of time. It is said that the Star Bird transports the souls through the stars when it is time for them to return to the celestial sea, however the Star Bird is also tasked with delivering hopes and dreams into the cosmos to be fulfilled.

Presently, the Star Bird has descended upon earth to deliver 8 million souls, but judgement was halted by another celestial being and the delivery was put on hold.

The Vermilion Star Bird was valued for their hard work and dependability and thus was task with carrying dreams and souls on their wings into the universe.