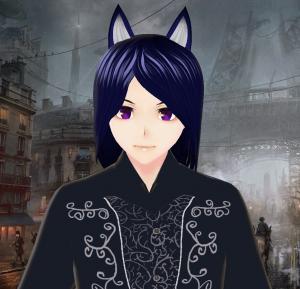 Grey Wander is a French and Polish VTuber. He speaks French and English but during his streams he mainly uses English. He's non-binary, and can be refereed as whatever pronom exist, he is both gender. He want to be a femboy. Wander wants to do many things such as music, drawing, dancing and singing.

Grey can travel trough dimension and got stuck in this dimension, he try his best but in the last dimension. His personality is split between Grey Wander, Artur Lormoy, and Black Star. They are all 3 different entity but they can't live without the others. They are souls bounded until they every end
He can change is shape a bit, and can look like a guy or a woman if he want, and he generally change name when he change is shape.

During the travel between the last dimension and this dimension, he lost is ability of being an Okami or a Wolf. However since the 21 of April 2021, he partially recover his ability and now have wolf ears (even if most people tell him it's cat ears). And he his still confuse if he want to be an Okami (Wolf) or a Kistune (Fox) or both.