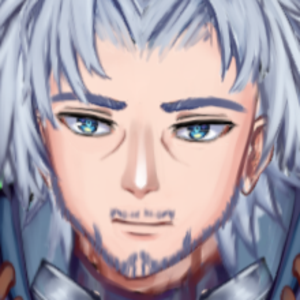 Gigacore is an interdimensional story teller VTuber, travelling through it all to find the best stories.

An adventurer who took on a quest that was way stranger than what was mentioned at the start, Gigacore managed to track down a mystical item sought after by many, the Tempus Locus. Problem was, the Tempus Locus was active when he picked it up! Upon grabbing the item, Gigacore was whisked away through time and space to a dark, and dusty street lamp, and what looked to be nothing more. Frustrated that he might of just been stuck in such a place for quite possibly forever, he lamented and cursed the object...until a warm light washed over him. Gigacore turned around to find a dusty old Inn, with but one person running it. Upon meeting this fellow, he found out that he was at a place called the End of Time, and that Gigacore was the first person to be here in quite a while. The Old Man, upon hearing of Gigacores story about the quest and the Tempus Locus, asked to see this device. The Old Man lit up, as he recognized his own invention! Beaming, he mentioned that he had crafted this for someone who had accidentally arrived at the End of Time, but had no way of getting back home. Explaining the item in detail, Giga learned that he was immune to times effects on his body, and as long as he held onto the device, he was capable of traveling almost anywhere he wanted! Gigacore swore to help this Old Man in exchange for all his help, and built up the Old Mans inn. Now, whenever folks feel like times stopped, or slowed down, a warm light washes upon them. Before them stands the Adventurers Canteen, with welcoming arms, open tables, hot foods and comfy beds! Legend has it that Gigacore himself returns and tells all sorts of tales of his adventures. He claims that there's something else out there hes looking for in all those dimensions and times, something that will help not only him, but the folks who have come to know him