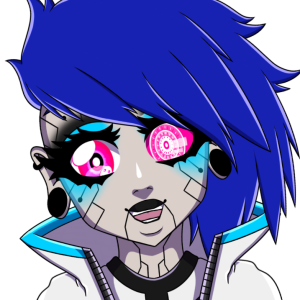 gh0stMach1na is an English Vtuber, usually going by "Gh0st".

They are a non-binary, pan Twitch Streamer with a spiky blue undercut and a spunky attitude. Their eyes are what gets them the most compliments, as their striking colour and eye shine shape compliments their name. Likes monochrome and bright neon colour schemes.

Their models are self-made, using an iPhone 11, PC Webcam and Leap Motion to interact on their streams.

:NAME REDACTED:, everyone knew them, yet nobody knew them. The world's most notorious hacker, usually in it for the money and notoriety, using the alias: Gh0st. One night they found a goldmine, a way to expose all of their customers and their targets simultaniously. But it wouldn't come without a price. Sucked into their own string of 1s and 0s, Gh0st was trapped, becoming their own data, becoming part of the very AI that got them into this mess. The only way to reconnect with the real world again was to get their face out there, to hope someone would find them and save them. They found the easiest way to do so was to stream, as it allowed them to relax and enjoy another favourite passtime of theirs; gaming, and also allowed them to connect with the real world they once knew. Maybe one day they will be free.

The world lived in harmony with their man-made online AIs and physical Robotic Assistants. Gh0st had made quite a name for themselves over the past few hundred years as an underground, data-retrieving AI. Though living in the world of Androids and Cyborgs, Gh0st longed to feel human again. Or at least as close to being human as they could. With the help of their underground criminal community, they were able to find a body to upload their consciousness into. It was a little broken and missing some parts, but Gh0st would take anything to feel real again. The group fashioned a pair of robotic hands, a robotic leg and a robotic eye, and hard wired the new vessel together, before plugging the body into the network hub, letting Gh0st upload their consciousness into it. Opening their eyes for the first time in hundreds of years, Gh0st began to learn how to live again, albeit with several robotic parts. But they wouldn’t trade it back for the world.