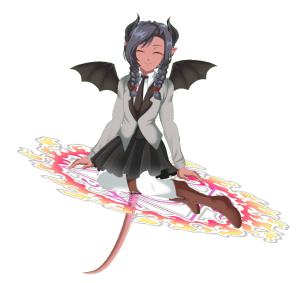 Tiefyweefy is a D&D Tiefling mage, scholar, and disability activist with Cerebral Palsy who roleplays casting through her scry-crystal while on her assistive Tenser's disc to offset her limited mobility.

Being born in lore (and out) with a disability, tiefyweefy uses that as the main focus of her content on Twitch and on YouTube. When she is not discussing disability in her daily life, she is discussing its presence in pop culture, society, law, etc., and how those facets positively or negatively impact the reception and perception of those with varying disabilities. Everything from anime, manga, games, movies, TV shows, tabletop roleplaying games, to documents covering disability policy — all of that may come under tiefyweefy's eye as she uses it as a discussion point, not only to educate, but to encourage a hunger for positive lasting change.

Tiefyweefy is the Mama (founder) of the VTubers with Disabilities group on Discord, and a corresponding list on Twitter. Through the list and the Discord group, her aim is to bring VTubers and Vstreamers with a variety of disabilities (diagnosed and undiagnosed) together so they can make friendships, network, and get advice.

When she is not managing her group, or casting on Twitch, tiefyweefy can be found playing Dungeons & Dragons, often as herself to showcase disability representation in fantasy. Tiefyweefy also writes novels and stories under the penname T.W. Brightlocke as a carryover from her past life as a fantasy author and erotica-romance ghostwriter.

She identifies as bisexual/pansexual and polyamorouss. She is loved and supported wholeheartedly by her long-time friend, life partner, stream moderator, and sometimes-co-creator, Kali Baba, whom tiefyweefy is almost never without.

Her casts are described by others as calming, comforting and inspiring; and tiefyweefy is determined to keep it that way, whether she becomes well-known or not!

Felicity Brightlocke is the youngest member of the Brightlocke Royal family. Daughter to a master-wizard father, and a heroic sorceress mother, she was born with wild magic and Cerebral Palsy. But neither of those differences slowed her down in the least. She spent her childhood and young adulthood reading books and talking to spirits to write stories!

When she became a teenager, though, her father tried to teach her to do “real magic” as the daughter to famous casters should, only to realize her magic was too chaotic to fit in that little box.

For a long time, Felicity wasn’t sure how she would ever use her magic and unique talents to help others (After all, she wasn’t allowed to go out and adventure with her twin brother or her cousins because of her less mobile body and weaker constitution). But she trusted in the Goddess (her kingdom’s patron deity of Love, Lust & Life/The Succubus Queen of a forgotten realm) to guide her in the right direction, eventually.

That day came when a pestilence descended upon the land, and, desiring something new to learn and somewhere to “go” Felicity decided to take the family scryball for a spin. She did, realizing she’d managed to scry into a new world, filled with new and interesting individuals known as “VTubers.”

Immediately, Felicity knew she had to become one herself. She consulted The Goddess and her support bard/boyfriend Kali Baba, for guidance, and they both told her to follow her heart. So she did.

She took on the mage name of “tiefyweefy.” Felicity had used this name as a young maiden while writing romance stories before her father told her to “get serious” about magic. She reclaimed the name, deciding she would be a voice and a warrior for other adventurers and writers with disabilities. She would make that the focus of her magic casting, and share her family’s legacy of using magic to augment disabilities while she was at it.

While Felicity may come from wealth and privilege, she knows the weight her last name carries, and is determined to use that magical and worldly privilege for her demographic: people with varying disabilities and orientations.

She still has to deal with the occasional wild magic surge, but with many friends, supporters, and lovers by her side, she is getting better at casting magic every day!