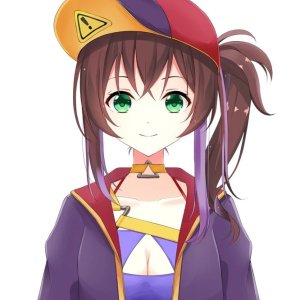 Frederett is an Indonesian female Virtual YouTuber. Previously, she was an independent Virtual YouTuber. Currently a member of AKA Virtual's Indonesia Team, alongside Mai, Airi Cordelia, Reinanda Rea, Akemi Nekomachi, and Velary Lusticia. She can speak fluent Bahasa Indonesian and English.

As a child, Fre lived in a simple but happy family with her parents. Until one day, Fre's father, who was the only breadwinner in the family, died. After that, for many years Fre and her mother lived in deprivation, even to the point of starvation. One day, her mother sold Fre to a laboratory just for money. In the lab, Fre was used as a guinea pig with the code F123D3123TT (which is still on her right leg), her right hand was cut off and replaced with a robot hand.

Although the experiment was considered a success, Fre, full of fear and anger, then destroyed the lab and managed to escape by leaving the lab on fire because of the damage she made.

The name Frederett itself is not a real name but is taken from the code given by the laboratory.