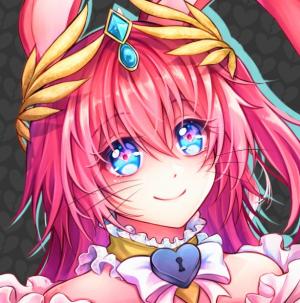 FlashyKlau is a Virtual YouTuber and Streamer who makes content in English. She is an Artist who draws a wide variety from illustrations to animations, she also does commissions.

"A Baka Bnuuy with two different eyes. Queen of the Kuneho Kingdom. Harnessing the power of emotions. Streaming Variety featuring Art and lots of VR and Switch games."

Klau was born to a forest dwelling bunny people tribe called “Bnuuys”. A tribe residing deep inside the mystical forests of Kuneho and are known to have an affinity toward emotions and the ability to harness those emotions and turn them into power.

On a hot and dry afternoon an army found themselves at the doorsteps of the Bnuuys and leading them was the Prince of Kuneho. Klau, acting as representative of the chief, rushed to greet them. There, her eyes met with the prince’s. The prince introduce himself and easily captured the heart of the young Bnuuy. Klau ordered her tribe to supply the army with rations and shortly set them on their way.

A month passed and the memory of the prince was still on Klau’s mind, so much that her prey that day escaped easily out of her grasps. On her long way home she could pick up a faint smell of fire. Worried, Klau rushed back home. The young Bnuuy could not believe her eyes, her home... her loved ones… her family have all turned to ash in front of her eyes. From the grief Klau felt, one of her heart shaped pupils painfully split into a broken heart, unleashing a strong storm of emotions. Not knowing where to go, Klau ran as fast as he could to the one person who was on her mind, the prince. The prince took Klau in with open arms and in no time a friendship has formed and slowly after, a romance.

Years has passed and the young Bnuuy became a queen alongside her King. Over time Klau could see her prince who showed her such a kind smile turn into a controlling and manipulative King. Even so, Klau tried her best to stay with the King. One night, Klau was walking through the castle halls and passed by the king’s chamber. With her sharp hearing she heard it, the one who set fire to her home was none-other than the prince. Knowing Klau would run to him, he planned it all, attempting to use her hidden power. Heartbroken Klau fled as fast as she could, not looking back.

2 years have passed since Klau fled the King’s castle and took residence in a small village on the borders of Kuneho. Due to her being an extraordinary fighter, Klau was able make a living taking on many small tasks from resource gathering to hunting and even bounties. Klau acted as a protector of the village and defended the residents from unwanted intruders that tried to raid the village. While living at this village, Klau made many friends and even managed to beat a dungeon together with her companions. Klau told them her story and her plan to confront the evil king. After hearing her painful tale, her friends decided to help Klau with her goal and take down the king. With more companions and friends, Klau set off to the city of Nyancer.

It did not take long before Klau and her partner found the king’s chamber. The huge, golden chamber door was closed, A view Klau remembers oh too well. With a stump of her feet, Klau opened the chamber door and both her and Crow entered the bright room. They looked around for any sign of the king, but he was nowhere to be found. Suddenly, a ball of fire struck Crow on his chest, sending him flying to the wall and losing consciousness as he fell to the ground. “Crow!” Klau shouted, turning back to check on him. “It is so nice for you to come back, Klau.” Klau froze as she heard the familiar yet menacing voice. "Let us finish this!” Klau said with determination as she pulled her sword. The two turned to face the king with their swords pointing at him. The king, seeing such sight, starting to fear for his life and unleashed a barrage of fireballs. Klau and Crow getting closer and closer as they deflect his frantic attacks. To the point that the tip of Klau’s sword touched the king’s throat. “Please… let me live… I don’t want to die!” yelled the scared king. Suddenly, the king’s face changed; from fear he had a wicked expression knowing well it is his opportunity to strike the Bnuuy. He raised his hand, ready to fire one last fireball. Before he could even charge any magic, Crow lunged and cut off his arm while Klau swiftly beheaded the evil king.

Two years has passed since the death of the evil king. Klau took her rule as a Queen.

Normal - Half light half dark. One blue eye with a pink heart, one grey eye with a broken white heart. Necklace stores emotional energy from her, keeping her in check, however she can summon a heart-shaped gun and use this energy to power it.

Dark - Corrupted, two gray eyes with broken hearts. Necklace opens up releasing negative energy. Can be summoned on her own through intense emotion. Has blue fire and lightning powers.

Light - Radiant, two blue eyes with full hearts. Requires others’ energy to summon, the most powerful, cannot be held for a very long time. Can summon a huge sword. The armour isn't exclusive, she can wear her armour in her normal form.