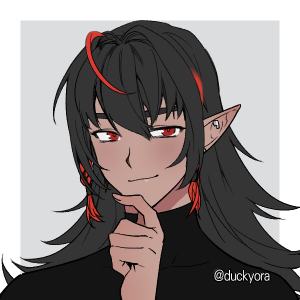 Fhashyl is a Variety Vampire Vtubing Streamer that mostly plays JRPGS but also puts his hand into Action games and Dungeons and Dragons content.

Fhashyl is a vampire born in Northern Wales in 1568. One night while he was taking a stroll, he encountered a fortune teller that informed him of what the future held, specifically about Video Games. In his excitement, he chose to sleep for several hundred years in order to experience them for himself.

However, as he slept, his soul was disturbed by a denizen of the Void and this denizen wanted to offer him power in exchange for his soul. Fhashyl very quickly said: "No. I'm going back to sleep."

In a fit of rage, the Voidling split his soul in two halves, one remaining in his original body and the other half going into a body in a place called Eorzea. Once he awoke, one of the first games he played happened to be the game that contained his other half and after learning some....interesting arcane abilities, he can occasionally switch between bodies at will.