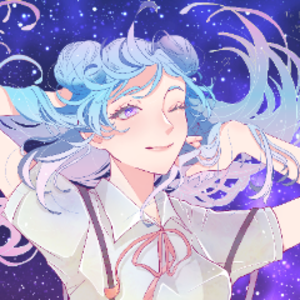 Eri Hoshimiya is a VStreamer who makes content in English. She streams games such Fire Emblem, Genshin, Persona and a little sprinkle of just about everything else!

Eri Hoshimiya is from the dwarf planet of Eris. Wanting to have some fun and explore, she often rode on shooting stars to explore the galaxy but one day something went wrong and she accidentally crash landed into Earth with seemingly no way of getting back home.

Fortunately, Eri fell in love with the planet and decided to try and learn everything she can and make as much friends as possible. Her previous name is unknown as she changed it to simply Eri (named after her home planet) when she arrived on earth in an attempt to fit in.

She has little antenna hidden in her space buns and hates when people call her an alien as she wants to be seen as just a normal girl.