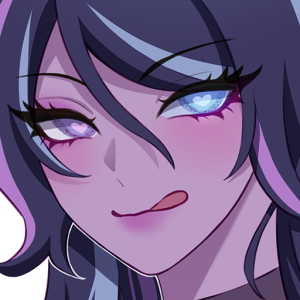 Elouyn is a female English Virtual Streamer, who has been streaming since October 2021. She is known for her overly warm and flirty personality, and upper-class English accent. Elouyn focuses on breaking down game mechanics to learn them fluently, then uses her knowledge of the games she plays to teach others on how to get better. She prides herself on maintaining a loving and welcoming environment for all those deserving of a safe space. Elouyn streams every day except Fridays over on her Twitch channel, from 5pm UK Time until late evening!

Professor Elouyn Valjor Birieth os Eolonda is the High Enchantress of the Twilight Grove, the most prestigious magical academy on all of her home planet Tyrasia. Upon the desire to obtain knowledge of the entire cosmos becoming too much to bare, Elouyn attempted to teleport herself far into the depths of the universe from where she resided.

She was successful, to an extent, however having seemed to only have projected the physical manifestation of her soul across the cosmos, leaving her physical vessel lifeless and dormant back on Tyrasia. Without a physical body to control, she struck a deal with the first woman she came in contact with on Earth, and eventually assimilated herself with the human woman.

Now in complete control, Elouyn became fascinated with the technology of this foreign world, of which something her planet had never even dreamed of, and slowly became infatuated with video games. She decided upon learning the deep mechanics of the games that she played, and used her teaching background to her advantage so that she could start teaching the denizens of this world how to "get good" at video games whilst she studied the planet in her spare time.