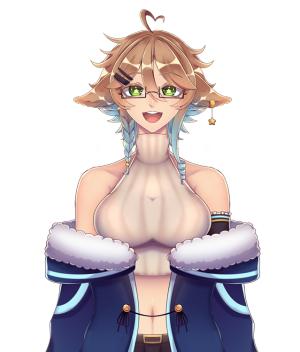 Eilon is a female Elk VTuber from the UK. She makes content in English. She plays a variety of games, but mostly plays simulation games or RPGs.

As her last name implies, Eilon descends from a family of knights and mages. While the family history was lost over the generations the powers remained. One day while roaming the woods she found a hurt animal being attacked by hunters, running in to protect it, getting hurt in the process, she is saved by a strange animal-like girl.

The girl had ears like a deer, her face covered by a deer skull like mask and antlers that failed to hide the etherial cold blue eyes behind it. She had bones on her clothes, barbed wire around her legs... fox like tails and.....a scythe.

Thats as far as her memory goes.

After this incident Eilon began noticing a deer tail and ears sprout from her body, her hair took on a blue gradient, her body became stronger, faster, and magic became a reality for her. Out of fear she moved to the middle of the woods to hide and learn to control her new abilities.