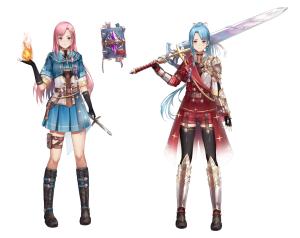 Yuki Astrea and Yuna Astrea (known together as Duo Leveling) are twin English-speaking female VTubers who stream together as a pair. Their character designs are based upon popular RPG elements, more specifically from the Fire Emblem series. Although identical twins, Yuki and Yuna each have differing personalities.

Yuki Astrea is a part of Duo Leveling, one of the first twin vtuber duos to be signed to an agency! The older Astrea twin is a knight who aspires to be a paladin. She isn’t the sharpest tool in the armory but Yuki is loyal, caring, and is a very talented artist. The younger Astrea twin, Yuna, is a genius mage who keeps the guild in order. She is calm and reliable, but sometimes has a temper.

Yuki and Yuna incorporate their RPG theme into their streams as well, referring to their fans as "guildies" or "guildmates", and present streams as quests with objectives. Depending upon the success of said quest, the twins will be awarded a certain amount of exp and gold, similar to most RPG games. These outcomes can change the condition of future streams.

In a world far, far away…

A fierce war waged between the free races and those of darkness.

These ferocious foes made it difficult for life to thrive outside of the cities protected by mana-core crystals.

Adventurer guilds, led by kind and brave souls, often filled the gaps in defense when a kingdom’s forces were simply stretched too thin. One such guild was Atlas, a new adventuring guild headquartered in the kingdom of Elysia’s capital, Eden.

Led by the twin adventurers Yuki and Yuna Astrea, this guild was meant to be nothing more than one of the many that defended Elysia’s lands. However, fate would have it differently…

The goddess of the stars, Selene, foresaw that humanity would soon battle against a terrifying ancient evil of old who was readying its armies to invade the entire world. She selected Yuki and Yuna to become her Astral Guardians, beings capable of crossing worlds and stars alike.

To collect mana from a new world called Earth in order to restore the goddess to her full power. This would allow her blessings to give rise to more empowered Astral Guardians to defeat evil once and for all.