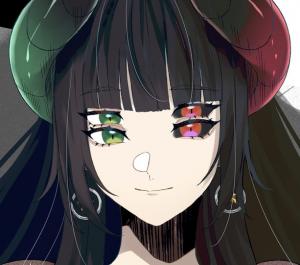 Dream is a Vietnamese ENVtuber who makes content in English on Twitch. She is a variety streamer whose content includes things like JPRG's, MMORPG's, board games, visual novels, party games, and other multiplayer games for frequent collaborations with friends.

The embodiment of dreams and nightmares themselves takes form as a six-eyed sleep demon that the universe spawned during the times of early human civilization in order to bless people experiencing sleepless nights with sweet dreams. Her other form, Nightmare, plagues those who deserve it with their worst nightmares and makes them wish they never slept again. She has an eye on each hand that normally don't make an appearance except for when she's trying to look into someone's soul and being to determine what course of action she needs to take. Although this is the form she normally takes, as she is a conceptual entity with no set form, she can change her appearance to be anything and anyone.

She has the ability to travel to different worlds, dimensions, and time periods in order to help those in need; however, after developing friendships and witnessing them all eventually come to a end due to the nature of time, short human lifespans, and her agelessness, she has since stopped appearing in front of people unless they are asleep and remains alone.

Nowadays, she prefers to reside in more modern times on a planet called Earth due to their technological advancements that allow her to bide her time on the internet. In her spare time she streams games to create a relaxing environment that allows people to forget their worries.