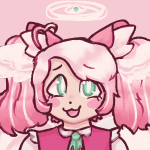 Dovey is an english-speaking angel catgirl Vtuber who makes minecraft content primarily on youtube. She also streams on twitch but not often. She plans to do art & chatting streams and videos in the future but does not currently. She is a lesbian.

Dovey is an angel who has taken the form of a digital catgirl. For a very long time she inhabited the angel world, until she saw an 'anime catgirl' on the human internet. Instantly enamored, she assumed this is what all humans were and decided to become alive. Upon discovering catgirls were not, in fact, real, she almost decided to return to the angel realm, until she realized there was another way to be a cute kittygirl - through the internet!