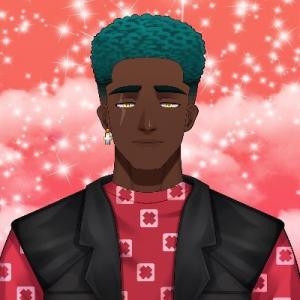 An variety Vstreamer that plays anything between Sims, FF14, Horror, Action Adventure, Open World and trying his hand at FPS' games! From time to time he will play multiplayer games with his friends and cause chaos or have chaos unleashed on him.

Born to a middle class family in the Village of Tormin, Donielss was the middle child of the Fenix household. His family wasn’t blessed like other households with magic but they made it work. However one day a red hooded figure massacred Tormin, no one knows why but Donielss was the only survivor. Left with a scar on the left side of his face. Fairies within the forest nearby heard his cry and saved him from an ultimate demise.

The White Rose Adventurers' Guild took him in and once of age, he joined them. Before he turned eighteen the head fairy, Queen Ellie, gave him the unfinished spell book the red hooded figure used with an earring embedded with her magic, thus granting him magic. She said that since his scar is magically linked to the book he should be able to use magic.

Up until recently Donielss has gotten into video gaming and the vice captain decided that he was going to lead the streaming portion of the guild. Good Luck Donielss!

Update: Donielss has been kicked from The White Rose Adventures' Guild for use of magic on stream and now formed a new group Called: The Oath of the Fenix