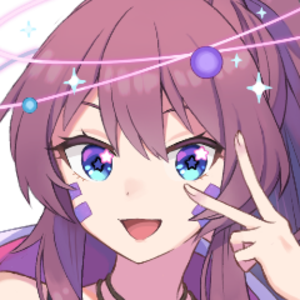 Cyno is a North Star VTuber who always streams with her co-host Kee! She posts covers on her YouTube as well as play a variety of games on Twitch (e.g. Valorant, Minecraft, Genshin, etc). She is hot-headed and cusses quite a lot, with her mellow cohost Kee balancing out the hectic stream.

CYNO'S BACKSTORY: All stars are born with a blessing: to be able to fulfill others’ wishes. Cyno, the brightest star in the sky, saw it as a curse. Thus, she gathered freedom fighters, splitting off from their society and dubbing themselves Ursa Minor. Together, they outran their fate. While travelling, however, Cyno began hearing voices from Earth and, succumbing to the pull in her heart, fell onto Earth to grant the human’s wishes: to accompany them and soothe their loneliness. While fulfilling this wish, she gradually gained her powers back, leading to the form she has currently. Nowadays, although she is free to leave, she continues to stay to fulfill not only the people, but her own wishes, finally living freely.

KEE'S BACKSTORY: Originally belonging to Ursa Major, a royal line of stars that lived in luxury, he deserted his post as crown prince once he learned of Cyno’s beliefs. Thus, he became one of the freedom fighters that belonged to Ursa Minor, getting the role of her right-hand star. While Cyno crashed into Earth, he was left twinkling alone in the sky, waiting for her return. As a result, when he found out where Cyno had gone, he was more than happy to dim down his form and visit Cyno every day in order to help fulfill her wish faster.