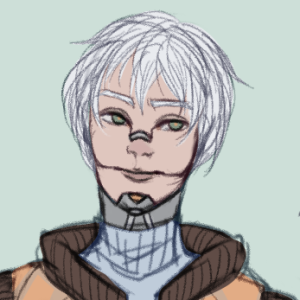 Cykosu is a Male English-speaking VStreamer and VTuber, He plays a Variety of whatever games he is enjoying at the time. Usually hangs out with his friends on most streams,

His Birthday is April 15th,

Once a normal human man turned into a powerful Cyborg, one day a man working as an investigator was sent to investigate an abandoned lab, not knowing the lab had been armed by its previous owner, falling into the traps left behind, he found himself injured, on his last breath, his hand connected with a 'Soul Core', a contraption left behind by the labs owner, using the power of a magical leaf enhanced by technology, the Leaf's flesh recycling properties contained by the contraption wielding it allowed for it to consume, and recreate the investigators body, at the cost of the memories of who he was, he was given superhuman-like abilities, bestowing him enhanced movement, self-maintenance and Soul Manipulation.

Upon his body being rebuilt, he woke up, not knowing where he was, or who he was, only to see a UI through his eyes,

"Welcome, You are now connected to the 'Cypher's Root-7 Kinetic Sentry Unifier' User Interface, C-7KSU UI for short, Your transmutation has been completed, and you are now free to use your body once more. Thank you for your cooperation in finishing 'SOUL CORE' MODEL C-7KSU!"

'C-7KSU... Cksu.. Cykosu, is this supposed to be my name?' The former investigator said to himself, pondering who he is. Testing his new powers he decides to connect to various websites, in an attempt to understand where he came from, and how he was created, and where he goes from there? that is yet to be seen. Though he senses the presence of others within the forest this lab is in.