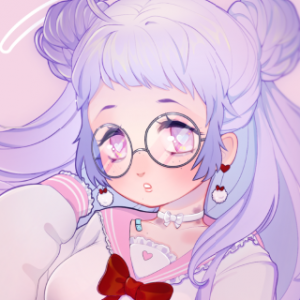 Eve-Marie "Mimi" Valentine is an angel of love trying her best to make it as a V-Streamer on Twitch. She mainly plays Elsword, Phasmophobia, and various RPG Maker horror games. Mimi is a digital artist and sometimes streams art, often with no mic enabled and music playing. Though her appearance is cute, Mimi uses very crude language and enjoys causing problems on purpose. Her birthday is 02/14 and her height is 4'5" (134.62).

Eve-Marie is a fallen angel from Heaven, which is ruled over by many Demigods and the One True God. Originally made to be a cute, subservient angel who was to do the bidding of her God, Mimi never learned to think for herself. She is an angel of love― though she was never actually allowed to matchmake. After 11,000 years of forcing her feelings to the side all for the sake of being a good girl, Eve-Marie broke and committed a horrible sin, resulting in the violent removal of her wings.

Being banished to earth for the slaughter of her God, Eve-Marie sought out a new home and new friends, eventually falling for a man she later killed out of self-defense. Riddled with guilt, she tried to jump off a bridge. ...However, her attempt was unsuccessful, and she ended up with a concussion and moderate wounds over her body. A kind soul, later revealed to be a demon, noticed her body and brought her home to tend to her wounds. The demon, Allister, works as an assassin, while Mimi stays at home and plays video games. An ultimate NEET.

Though a fallen angel, Mimi's soul has been saved from corrupting. She "secretly" kneels under the stars every night and repents for her sins. She is not forgiven, but her efforts are recognized and for that, she is allowed the privilege of staying pure.