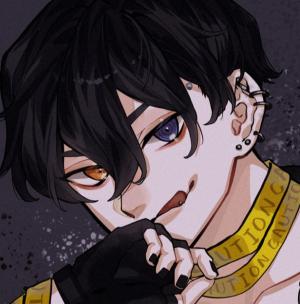 Cord is a VTuber who creates content in English and streams on Twitch. He describes himself as an "insufferable himbo from Purgatory" and "genki goth." He's usually cheerful, confident, and a bit sarcastic, and loves orange juice and horror. He usually streams video games, with a focus on horror games, as well as Nintendo and nostalgic games (such as Wizard101). He also does art and chatting streams.

Cord is a half human, half abomination who was born in Purgatory. As an early teen, he decided to escape Purgatory to see what else was out there. God attempted to strike him down, but was unsuccessful- however, he lost most of the sight in his right eye due to this. Nowadays, he's a college student studying art and living with his 4 abomination roommates (Milk, Bevel, Horace, and Knob).