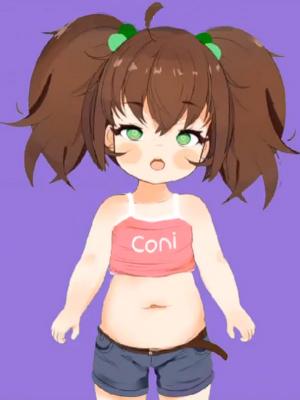 Coni's content is easily identifiable by her very distinguishable cartoon-chipmunk sounding voice and heavy focus on her eating and drinking during her streams / videos.

Her fanbase mostly consists of individuals who are (for lack of a better term) 𝘧𝘦𝘮𝘢𝘭𝘦-𝘣𝘶𝘳𝘱-𝘦𝘯𝘵𝘩𝘶𝘴𝘪𝘢𝘴𝘵𝘴. Which is why she burps in almost all of her videos and livestreams.

Coni also had over 200 patrons on her original Patreon account during this time. Sadly, her climbing success would come to a sudden halt in early 2018 when she became the target of a mass-harassment campaign by individuals who found her character's theme offensive.

Her successful Patreon page was terminated as a result, and her original ASMR YouTube Channel received multiple strikes. Coni responded to this by removing over 200 videos from her YT Channel and archiving them all onto her pixivFANBOX page. (𝘛𝘩𝘰𝘴𝘦 𝘢𝘳𝘤𝘩𝘪𝘷𝘦𝘴 𝘢𝘳𝘦 𝘴𝘵𝘪𝘭𝘭 𝘢𝘷𝘢𝘪𝘭𝘢𝘣𝘭𝘦 𝘵𝘰 𝘵𝘩𝘪𝘴 𝘥𝘢𝘺.)

Coni then began frequently changing her username, likely in an attempt to escape the angry mob that was harassing her. Going from Loliconica, to LollipopASMR, to BurpBug, and finally settling with the two usernames she goes by today. Which are CuteConi and ConiPlays.

Coni officially debuted as a 'VTuber' under the username BurpBug on January 1st, 2020. Before then, she never live-streamed and only uploaded pre-recorded ASMR videos on YouTube.

Walking home from school on an average sunny day, an innocent blue-eyed girl discovers a fallen powerline and accidently electrocutes herself to death.

As the innocent girl's soul departed, an opportunistic dying alien (who had been observing the Earth for a new body to hijack) possesses the newly vacant body.

But, instead of heading back into space, the alien decides to stay undercover on Earth and study humans by impersonating the girl.

Explaining these changes away by claiming she hit her head, she learns that her name is Coni, and begins investigating humans via the internet. Quickly discovering how much attention she can obtain via weird niche communities.

So she begins giving people what they ask for. Which includes eating, drinking, and burping on livestreams.

The pleasures of Earth and online attention goes to her head, and she becomes a cute chubby glutton. However, the only thing growing faster than Coni's belly is her older sisters suspicion.