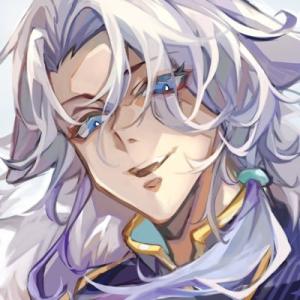 Collin is a Taiwanese vtuber who makes content on youtube, mainly consisting of various games in English, prioritizing over his interaction with the audience rather than the game itself. He's also able to speak Italian, able to read, and speak simple Chinese. His birthday's the 12th of January, making him a Capricorn. He's 183cm tall and he debuted the 8th of April 2022.

He's a divine beast ( Bai Ze ) who had to come to earth for some business, though during his travel he got hit, fell down from the sky, crashed in Europe, hit his head, and lost his memory. He lived for many years in Italy, until he started to remember fractures of his memories, his objectives and so he flew to Taiwan, though even there, not knowing anything or anybody, he lost himself. As the alcohol-loving divine beast he was, he couldn't hold back from the need to drink, though he had no money and so, finding a credit card, he used it to have his fill in a bar, until the actual owner of said credit card came to look for it. But by that time he had already consumed every single drop of credit that card held, freezing the owner's bank account. Said owner is now his manager, Ma-chan, who tried to sell him at first, seeing his peculiar appearance, but none wanted him and so she now force him to be a vtuber to pay back his debt.