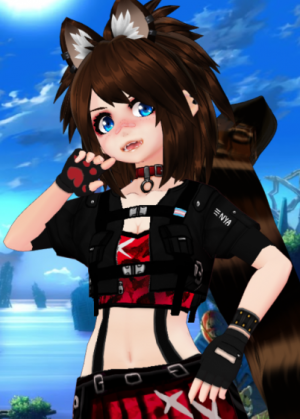 Code is a transgender catgirl vtuber who streams a variety of video games, everything ranging from metroidvanias, roguelites, soulsbornes, to fighters and has a stronger lean towards smaller indie games. Usually she streams 3 games a night out of a pool for 5-7 games picked out each month. She was also an avid achievement hunter at one point but has since eased off, but will still routinely go for 100% and platinums on stream and is always looking for a challenge to chew on. She has a bit of a excitable tomboyish personality, and ranges from high energy to very sleepy, and usually is known for streaming very late at night. She also places a lot of focus on her chat and creating a chill and inviting atmosphere for everyone!

Code despite her rather typical catgirl appearance seems to be more than she appears at a glance. Both an unknown breed of catgirl and never having an official debut, shes often aloof about both, simply stating shes always been -- that said she has also displayed a lack of understanding related to the concept of time.

The only things that can be said for sure is at the moment she appears to live in an arcade, and when she isnt sleeping or playing video games/eating pizza (which is most of the time), she has been seen taking up a variety of jobs, such as a waitress at Pizza Cat, Maid, Teacher, and more. Upon closer inspection though, she appears to display many cryptid qualities, such as being her hunger for cursed foods her favorite being something called demon triangles which despite having the appearance of a rock have displayed other worldly properties. Further studies are needed.