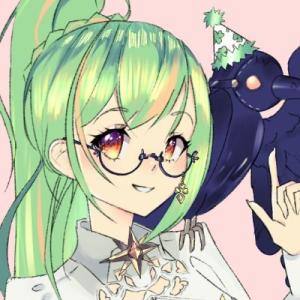 Clover Kusuri is a female Virtual YouTuber. She associated with the first gen of Yukapro and apart of the group "Celestinas". She is an isekai'd alchemist who became an astral apothecary in her new life, to bring happiness and joy to those who needed remedies. She regularly streams on twitch, playing games like Valorant, Apex, and Horizon Zero Dawn.

Clover is the Astral Apothecary from Lumiere, after getting isekai'd from another world. She now runs an apothecary named the "Chicken Coop" at the edge of Lumiere, overlooking a mountain, where she sells various potions and remedies with her pet crow Valerian. She is commonly called a chicken, due to her clover shaped pattern resembling the shape of a chicken, if you look closely enough.