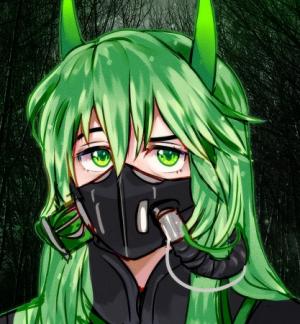 Caustic is a British Demon that lives in a never ending forest located in England. He is around 5 foot 9 with a slim build and he owns a Dark Grey Great Horned Owl called Birgil.

He is very kind and likes to give a helping hand when asked. Despite his look he can be really shy when meeting new people but will open up more overtime.

His favourite colour is Green and he loves Hip Hop Music. In his spare time he plays Games, does Photoshop, 3D Modelling, and even Dancing.

Caustic lived in the lonely dark ravines of the underworld, after being cast out and toyed by the overlords for being "too pure hearted for a demon", he went in search of somewhere more peaceful.

Breaking free from the shackles of the underworld he found himself in a never ending forest located in England on planet Earth, not knowing where to go he decided to take camp and hide away for many years to get his strength back.

As time past he grown fond of the animals lurking, so far as to becoming really close to a local great horned owl that he named Birgil. Eventually he gained enough strength to become one with the forest by using his inherited demonic powers to create a energy source from the purity of nature itself, which then he proceeded to condense that energy into self forged armor and a mask that would forever give him the power he so needs to protect himself, his owl, the forest, and his soon to be friends.

Fast forward to the present day Caustic and his trusty owl Birgil are living peacefully in the forest, living a calm lifestyle in their own cabin, Caustic even managed to build his own technology powered by the energy he created from the forest to communicate with the outsiders, learning how to speak fluent British English and even grew a huge liking to Video Games, Photoshop and 3D Modelling, he also took up Freestyle Dancing but he's not really good at it.

Now he wants the world to know that not all demons are evil, and with how much time he has on his hands, he's gonna prove it.