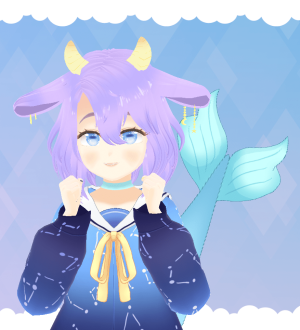 Capria is an English VStreamer who can be found streaming on Twitch, and has been streaming since June 2022. She is the personification of the zodiac Capricorn. She is extremely close to her friend Ayasumi Kai, and is known for being the more wholesome and family-friendly of the two. Capria can be found playing a variety of games, as well as streaming her art process. She prides herself in providing a loving and welcoming environment for all those looking for a safe space. Capria streams weekly typically every Saturday, Monday, and Wednesday at 4pm EST.

From the very beginning of time, there was only darkness. Slowly, stars formed to create immortal beings called constellations. However, there was a lonely constellation that shined the brightest.

A millennium of years passed until a lonely soul looked upon the night sky, yearning for a connection. Astounded, the keen constellation awoke from her slumber, eager to bestow her loving embrace.

Stunned at the sudden appearance of the woman, the constellation enthusiastically asked the lonely soul if they could be friends. The bewildered human looked at the woman and noticed her horns and goat-like ears.

Sensing the confusion and astonishment, the woman calmly explained that her vessel is a merge between what humans appear to be as well as her own eternal being.

The woman frantically said, “I am Capria Seabrook, your very own constellation.” The human was awestruck by the being before them.

It was at that very moment that Capria knew of her purpose bestowed upon her. The purpose is to give a connection to those who are the most lonely.

Now, Capria lives to bring her own light to those in the dark.