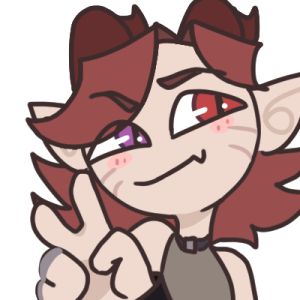 Cambion Kami is an outgoing, openhearted, and open-minded half human half demon from one of the 9 circles of hell (with an Australian accent). With their lively, upbeat approach to life, they stand out in any crowd within the 3rd ring of Gluttony. At least that's what people say when they first meet him, they.... tend to go missing not long after.

With regular technical difficulties, heaps of interactivity for his streams as well as not being very good at a lot of games, this leaves his streams to be rather chaotic. Cambion Kami spends a lot of his uptime on twitch either playing but not limited to games like Genshin Impact, Minecraft, Teamfight Tactics, VR Games and Fortnite, he also spends every Friday leaving the game choice up to his following to join and engage with like Fallguys or Marbles.

They also have a unique set of skills, such as writing, creating 2d art, 3d models (both of which he sometimes sells to the public) and an experienced competitive sailor of 12 years.... wait, what was that last one again?

The third ring of Gluttony is a harsh place for those who indulged themselves or over-consumed food, drink, or wealth items in life were sentenced to in death. This harsh landscape's outer ring is a horrific mangrove swamp, where the fauna is desperate for nutrients, the water is foul and the weather is always stormy, many lost souls find themselves forever drowning in the swamp waters below but never dying after failing to stay above the surface when coming to the realisation that the mangroves trees break with any weight on top of them.

Those lucky or unlucky souls that manage to not become lost in the depths below may find themselves on the mainland, the inner ring of Gluttony. A sloped field of vineyards plentiful with its suspicious fruit and open wine barrels filled to the brim, every now and then you can hear lost souls running down the slopes almost trying to rush back to the harsh mangroves, but they cannot be seen, as if their soul has been separated from their body. But the fruit is always so tempting, luring many into its perfect little charm. After a while of helplessly consuming them people realise that in this world, their hunger cannot be satisfied, including its hosts if you're unlucky enough to meet them.

People who become over-indulged will slowly make their way up the slopes of the vineyard and away from the edge of the mangrove, only when they are a certain distance from the water can they run the risk of running into another soul. A tall well-dressed male with odd-coloured eyes and horns gives the lost soul a refreshing grape juice box as an offer to follow him up the slopes to the winery at the top. Craving more to consume they always follow, but only when they reach the steps of the warm and lively winery do they meet the grim realization that the being they had followed was one of the three heads of Cerberus, Kami. Who was once a singular entity that hunted the dead within the ring preventing them from leaving until they came to the realisation that hunting is a little easier on their own than as a hound with 3 heads.

Not many people know what happens when you go to the top of the slopes and reach the winery, only that when people go up, do the wine barrels come down.