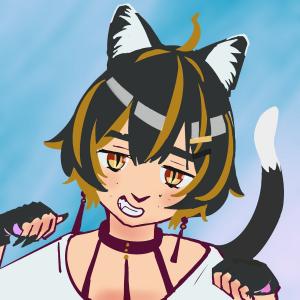 A chaotic Scottish catgirl VTuber trying to avoid the attentions of anything fae & turn her black cat luck around.

When she was younger, Caitie Sith was a rising star amongst the cats of the fae wilds. As a bookish and stern member of the Glaring Court, which deals exclusively with cat-sith affairs, she was expected to find a place of grace in the Unseelie Court over time. But a mild discontentment with fae society and culture grew into a hatred of the society around her. While the human world moved away from slavery and servitude, the fae realm clung to it and continued relying on human abductees for labour, as pets, as servants and guards, and as payment for old tithes owed.

Even in the human world, fae actions were having dire consequences. Neurodiverse, disabled and sick humans were being labelled 'fairy' and murdered for their differences. Anything associated with the fae was considered dangerous, and innocent humans were paying the price.

Instead of infrequently haunting the mortal world, Caitie took up a permanent residency there. It was a rash decision made in the fae equivalent of her cynical 'teen years', and living in a world not meant for her often leaves her drained.

But she has no regrets. She's spent centuries since then working to lessen the stigma against vulnerable humans — and though she talks disdainfully about mortals, she's fiercely protective of anyone vulnerable, chronically ill, disabled or mentally ill.

Lately, she's been concerned by the skepticism and disbelief that surrounds any talk of the fairies. She blames the internet, and so, has decided to use the internet to reach out to more humans. to reach out to the humans in the language they understand. She'll lure them in by playing video games, and remind them what they’ve forgotten: how to stay safe, how to evade the faeries, how to speak the tongue of this land.

It's a flawless plan, nyahaha!