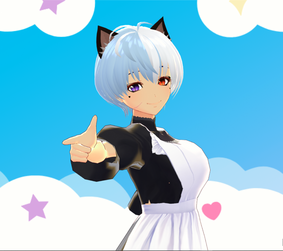 Blue is a 21 year old cozy streamer with a friendly disposition that makes content on Twitch and TikTok. They go by they/them and enjoys playing Minecraft, Animal Crossing, and Stardew Valley while talking with their chat. They're mixed race in real life and multilingual, although they primarily speak in English during their streams. Blue streams at 7:30 pm GMT+8 on Mondays and Fridays, with occasional surprise streams.

Blue is a villain that once ruled a nation before they were betrayed by those closest to them, so they decided- after the Trials that left them with so little mercy left for their captors and those that betrayed them- that enough was enough. It was time to start anew and bring peace to the Star Wanderers- and so what if that came with the use of violence to bring about a time of peace? Sure, there were many casualties, but to them, it was a necessary evil.

Sometimes, to be kind you must first be cruel, after all.

After that, they ran away, moving from town to town, server to server, to find the peace they hunger for.

They are friendly and kind, but their hands are quick to clench into fists in preparation for another battle. After the Trials, they also managed to unlock some of the abilities of the Star Wanderers that had long been out of use, such as the ability to teleport through time and space, which has led to Blue's manifestation in the world as a VTuber.