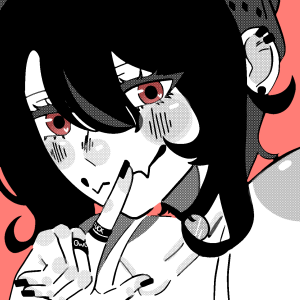 Biscuoot is an English pre-debut vstreamer and vtuber. Mostly streaming fps & scary games, art related content, and hanging out with friends, she's trying her best to bring in a mixture of energy and comfort to the table.

Although her avatar is a vampire, she is very forgetful, easily scared, and quite lazy. Though, when it comes down to it, she'll work hard for what she desires most.

Born human, fragile, cute, and naive. Biscuit craved her friend’s affection, affection never returned. Her friends controlled every aspect of her life, but as long as she could be with them, never alone, that’s all that mattered.

One day, late at night walking along the dimly lit roads, she had been turned into what she is now. A vampire, immortal, forever alone, the one idea she had hated the most, the one thing she never wanted. At that moment, she turned to see the person who had bitten her neck. Her “friend” stood at her side, with their fangs in her neck, then all went dark...

When awoken, she laid on the road burning with blood around her, it had turned to daytime. People surrounded her, terrified looks on their faces, but did nothing to help. She felt the burning sensation of the sun on her skin, and ran toward the nearby trees for shade. She screamed in agony, but her skin suddenly began to heal itself. Confused and scared, she felt the wound on her neck. She ran in disarray toward a nearby puddle of water and looked at her reflection. She didn’t see anything. She splashed at the water vigorously and continued to see nothing. She had heard about vampires and ghouls before, but thought they were all fictional stories up until this point.

Suddenly, her friend tapped her on the shoulder. The very same friend who had betrayed her trust and turned her into a monster. They threw a dog’s collar at her face, which stumbled Biscuit backward- splashing into the puddle of dirty water. They screamed words that Biscuit couldn’t hear, she wiped her face and looked up at her old friend. But they had disappeared from sight.

Picking up the collar, she began to break down crying. Tears flowed as she screamed at the top of her lungs. She flung the collar at a tree. And she cried in that forest till sunset. The next morning, she thought things over more clearly. She knew from stories that vampires were immortal. She would be living for a long period of time, her memories would surely fade away, wouldn’t they?

Biscuit stared at the collar on the ground, and began to put it around her neck to serve as a reminder to herself in the future of how everything happened. Her friend had been a controlling person who ruined her life, and up until the very end.. She listened to their every word, like a puppet. But she’ll remember this time, she had to remember everything that happened. When she finds her old friend, she would make this damn collar that they had given her. Her revenge would be as sweet as the blood she would drink for years to come.

After sleeping for a hundred years or so, she woke up from her old coffin to find herself in the modern days. After breaking into an apartment of a younger girl for her blood, she discovers a black box that lights up! The online world is now within grasp! And after some research, it seems like the perfect way to find her old rival...