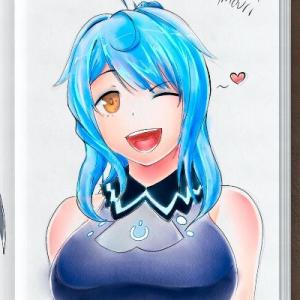 Bioroid Amouri is a Virtual YouTuber who makes content in English. She specializes in gaming and hopes to expand into other forms of media.

Amouri was originally developed as a data-gathering AI who was installed into a bioroid body. Due to the countless bugs present in her AI, she was never given a defined purpose. Thankfully, the lab staff are currently more interested in allowing her AI to evolve without interference, letting her stream and game.

However, there is a large cache of strangely encrypted data in her storage. Accessing that data, or any activity which causes her core temperatures to rise high enough, causes the bugs in her AI to become more exaggerated in a phenomenon dubbed, Nightmare Amouri. For some reason, this causes her physical appearance to change and warps her personality. As a result, it is not advised to give Amouri a weapon.

Her body can be safely disassembled. She also has storage for a lot of energy in order to keep her energy-efficient body running for as long as possible while using as little as possible. However, it is possible for her energy reserves to become too full. Should this happen, she will need to discharge that energy (though preferably not as an EMP) or risk overheating.