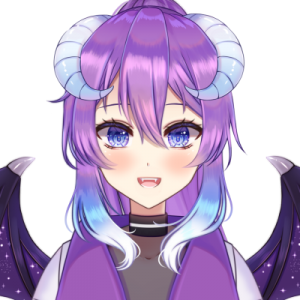 Azu is a non-binary "starlight" demon Virtual YouTuber who makes content in English. They are a variety streamer who primarily streams Psychological, horror games and story based games; talking with their audience and shouting into the void. They are currently preparing to debut, however in the time between preparation they are streaming on Twitch using a reactive-PNG.

Azure is a demon, who after living a life of isolation and losing out on social development now struggles heavily with trying to talk to people. Once reached adulthood she was given the freedom to do what she wanted. However, being alone for 18 years left her unable to recover what she lost. So she found comfort in the night sky she'd watch every night, the stars shining no matter how dark a night surrounds them and no matter whether they're alone or with others. From this, she was inspired to at least try to shine too! A demon who shines like starlight, the starlight demon.

It was hard, things didn't go right often, but working day after day she learnt more and was employed as an ambassador between demons and other species, now through her work she is still learning, but she's not alone anymore. Then, to reach out to more people she reached into the Vtuber scene to show how demons are and to express how their interests and loves are the same as anyone else's! Playing a variety of games, talking and just being someone people can trust through streaming how she truly is as a demon.