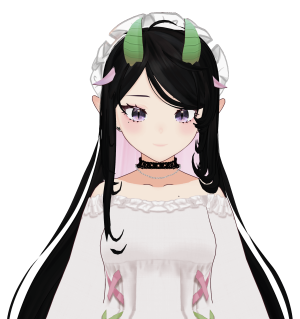 Azumi Sproutella is a demon Virtual Entertainer from the Land of the Dead who streams on Twitch. She is a variety gaming streamer that is primarily known for streaming retro, point-and-click adventure games such the King's Quest and Monkey Island series. Alongside these titles, she also streams Nintendo games, Genshin Impact, and other odd, random games. Her community members are called "Skellies" or "Skeletons" as a term of endearment, as all humans Azumi has met in the Land of the Dead have no skin.

She has upwards of ten different models in use, all of which were assembled in VRoid Studio using purchased or free-to-use assets found on booth.pm. These are all used and edited along the artists' guidelines, and all artists' credit is listed on sproutella.carrd.co. A widely loved redeem in her community is titled "FOV Change," allowing her audience to distort her models' camera. Often following this redeem, Azumi appears to sniff her chat, making sure they smell good enough to stay. Other popular redeems include the "Kooloo Limpah" sound alert, "Deep Voice Toggle," "Chibi Model Change," and "Noot Noot."

Azumi has never had a proper debut stream and has stated that she has no plans to have one in the future. She streams three times a week on Tuesdays, Thursdays, and Saturdays. She releases schedules on Twitter and Discord with times listed in Pacific Standard Time.

A 'demon' (or more aptly 'spirit') from the Land of the Dead working in Internet and Communications Services at the Department of Death (D.O.D) tasked with streaming to living humans to both learn about them and ease their concerns about the afterlife with video games as a medium to do so.